I got you a little tutorial (on Purl Soho ) to make a bunny finger puppet. Besides being adorable, this little finger puppet is easy to make; felt, scissors, a little thread, and a needle: children from 9-12 years old can make their rabbit finger puppet. You can even make several (in different colors) in one evening, with free time. I think a manual activity like this will greatly help develop children’s fine motor skills, in addition to having fun afterward!

How to make a felt bunny finger puppet

Using the template, cut two rabbits out of white felt and two others in a brighter color (red, green, yellow, or red, for example). To make your bunny finger puppet, sandwich the four pieces with the two white pieces on the outside and the two brighter pieces on the inside. Pin them together. Using white or cream yarn (or other if your bunny is another color) and starting at the bottom corner, begin to sew all four layers along the edge with a small running stitch. 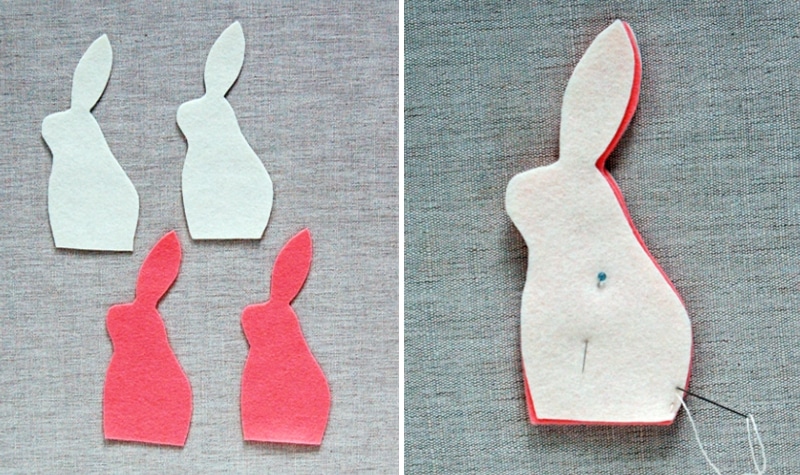 Sew this way along the first side, stopping at the base of the ear. From there, divide the felt into two ears each made up of two layers of felt (one white and one bright color). Sew through the first ear along its edges. Leave the other ear unsewn for now, you’ll come back to it later. 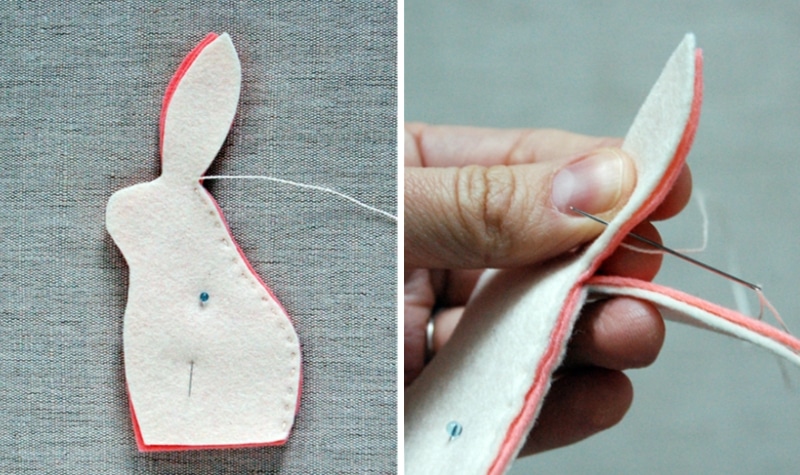 Resume sewing through all four layers of felt once you return to the bunny’s head, as shown below. Continue sewing like this until you reach the bottom edge of the body. 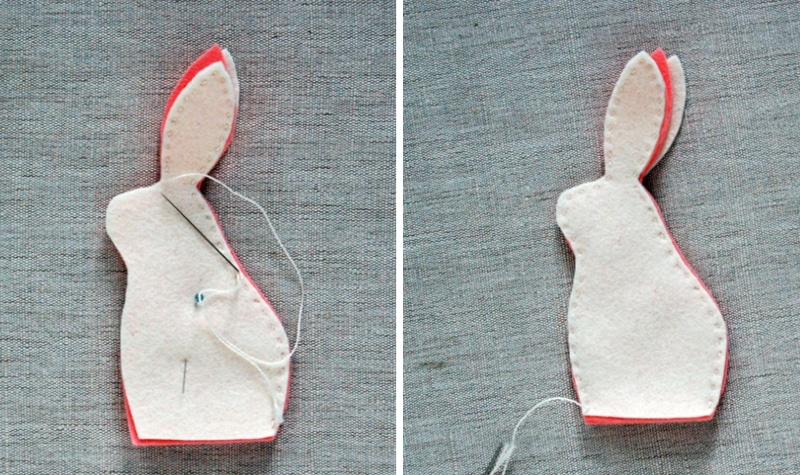 Open the bottom of the shape so that the brighter felt is inside the opening. Sew only two layers from the bottom edge of the puppet. Then continue sewing along the opposite side, though only the other two layers. This will form the finger opening. Once you have finished sewing the body, sew the second ear along the edge with a small running stitch. The bunny’s body is finished and ready to be embroidered.

Draw a face on the bunny with a washable marker, as shown in the template below left. Using pink thread, embroider a small nose. Make a few stitches with black yarn for the eye. 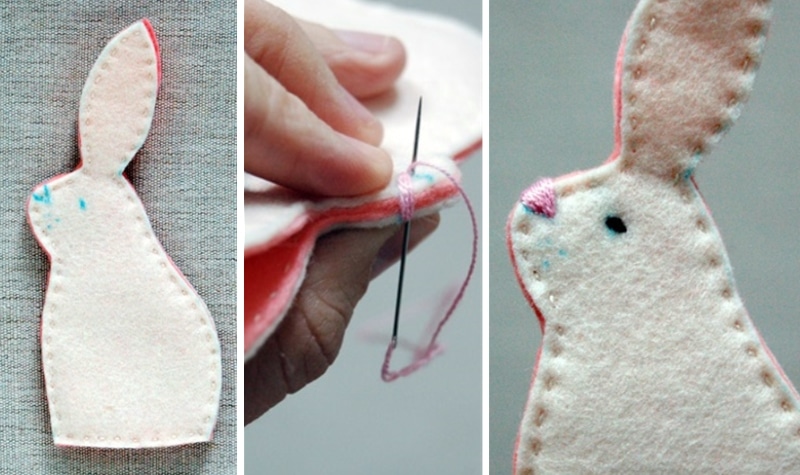 To make the rabbit’s whiskers, tie small knots and let the threads stick out. Then spray the finger puppet with water to get rid of the felt marks on the felt. 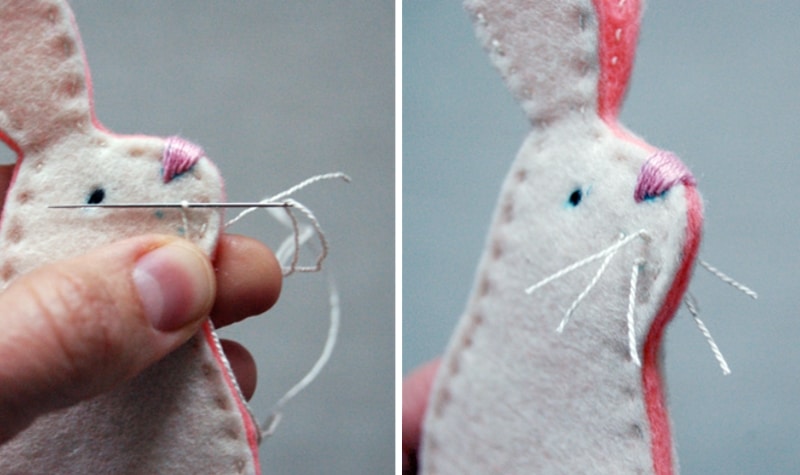 To make the pompom, wrap the wool around two of your fingers several times. Remove the loops of yarn from your fingers and wrap the end of the yarn tightly around the middle of the loops. Tie a small knot.

Then cut the edge of the loops to form a pompom. Cut the pompom so that it is fluffy and round. 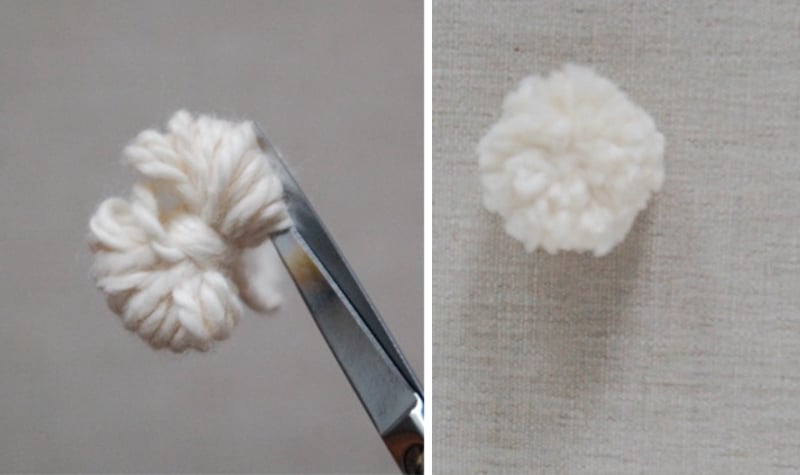 Using the light-colored yarn, sew the pom pom tail onto the puppet. Your puppet is complete. Repeat these steps to make a little bunny in each of the bright colors you have available! 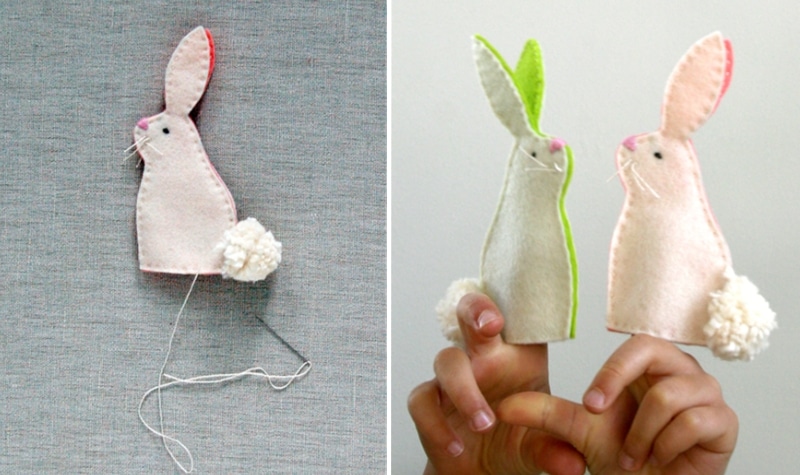 You now know how to make a bunny finger puppet!

3 Signs of the Zodiac, Whose Wisdom Even Surprises

How to Make Cardboard Binoculars: a Simple Model

How to Turn a Tree Into a Gnome House